Incorporating energy storage into a solar array is not as easy as just picking a battery off the shelf. Certain chemistries work better in certain environments, and storage capabilities are influenced by the solar application. 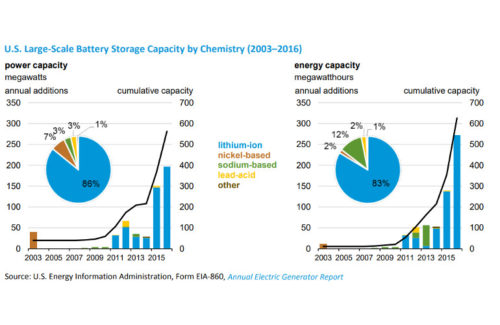 The U.S. Energy Information Administration (EIA) released a trends report on the U.S. storage market in May 2018. The report found that lithium-ion batteries represented more than 80% of the installed power and energy capacity of large-scale energy storage applications. Nickel- and sodium-based batteries represented around 10% while lead-acid and other chemistries rounded out large-scale battery representation.

Within small-scale battery installations (where commercial and industrial installs make up 90% of capacity), EIA was unable to pinpoint specific chemistry data, but it can be assumed that lithium-based batteries still reign supreme. Lead-acid batteries have been popular within off-grid installations for decades, but lithium-ion’s longer cycle life, lighter weight and decreased maintenance have made it the preferred choice for large-scale, EV and residential applications.

But lithium-ion is not the only—or best—choice out there for batteries used in solar-plus-storage installations. Here’s a brief rundown of the common storage technologies used in the industry, and which chemistries some popular brand names use.