Today I will take you to understand the impact of methoxysilane additives on perovskite solar cells through pictures and texts, hoping to share some knowledge for the solar cell industry.

2. After the introduction of (3-mercaptopropyl) trimethoxysilane (MPTS) containing -SH group, due to improved voltage and current density, the power conversion efficiency (PCE) increased from 18.4% to 20.8%, while containing- CN-based 3-cyanopropyltriethoxysilane (CPTS) will reduce the photovoltaic performance of the device;

3. The -SH in MPTS effectively passivates the defects by interacting with the Lewis acid-base of PbI2, resulting in larger grain size and longer carrier lifetime. Since a cross-linked siloxane network is formed on the grain boundary as a protective layer, the thermal stability and moisture stability of the device are significantly improved. 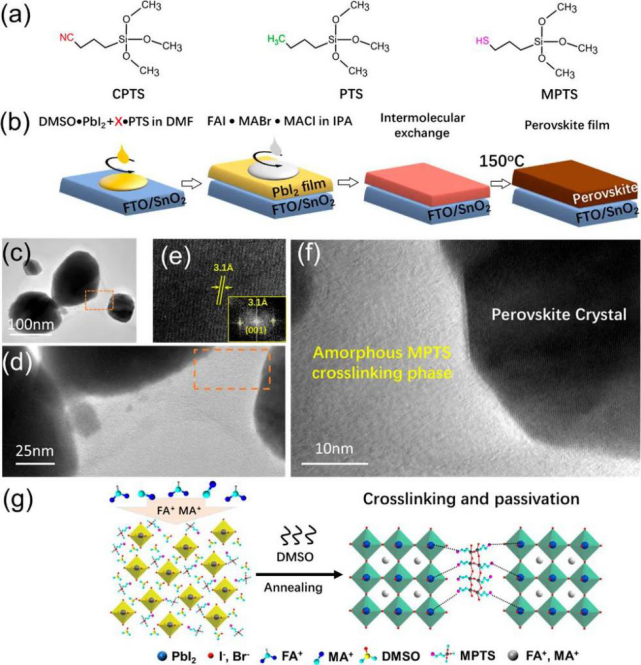 Select -SH as the terminal functional group of the target additive (MPTS). At the same time, the effects of other capped functional groups (such as -CH3 and -CN) on device performance were compared and in-depth studied to understand the relationship between the molecular structure of additives and device performance. The TEM image shows the adjacent perovskite grains drawn from the MPTS-added perovskite film and dispersed in an anti-solvent (chlorobenzene) by ultrasonic treatment. It can be found that there are gray shades between the perovskite particles. The MPTS additive perovskite film exhibits a cubic phase, and its corresponding d-spacing value is 3.1 Å. Figure 1f shows the enlarged heterojunction region of the perovskite-methoxysilane crosslinker between adjacent grains. Unlike the regular crystalline perovskite phase, the apparent amorphous phase can be clarified, which originates from the siloxane organic molecules surrounding the perovskite grains. 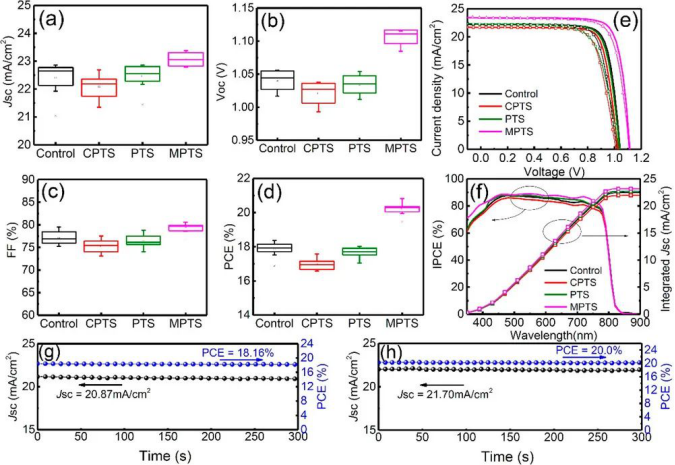 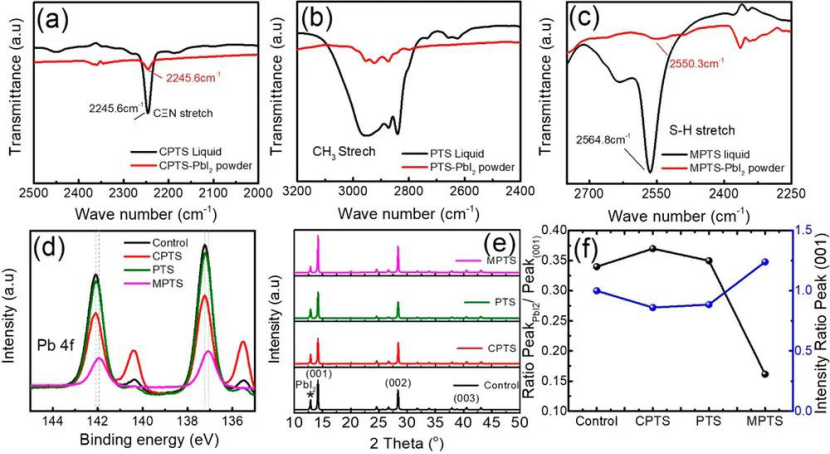 The FTIR curve shows that the C≡N peaks of CPTS liquid and CPTS-PbI2 powder are both located at 2245.5 cm-1, indicating that there is no interaction between CPTS and PbI2. The C-H tensile vibration bands near the 2800 cm-1 region between the C-CH3 and O-CH3 of PTS liquid and PTS-PbI2 powder overlap, so it is difficult to distinguish the interaction with PbI2 from FTIR measurements. However, compared with pure PTS, the tensile vibration band of -CH3 in the PTS-PbI2 sample seems to change slightly, which may be attributed to the partial solvation of PTS. It was observed in MPTS-PbI2 powder that the tensile vibration of -SH in MPTS at 2564.8 cm-1 shifted to a lower wave number of 2550.3 cm-1, which was attributed to the strong interaction of -SH in the powder. The peaks at 142.1 and 137.2 eV in the control film are assigned to Pb2+ 4f7/2 and Pb2+ 4f5 /2, respectively, and will not move when CPTS and PTS crosslinking agents are added, but after MPTS is added, they will move in the direction of lower binding energy. The shift to lower binding energy indicates that the oxidation state of lead is reduced, which is due to the electron donor of sulfur, and is in good agreement with the FTIR results. In contrast to the film, metal Pb was clearly observed in the CPTS and PTS films. The two weak peaks are located at 140.3 and 135.5 eV, respectively. In addition, the metal Pb peak intensity of the CPTS film becomes higher, which may be one of the main reasons for the worst PCE of the CPTS device. In contrast, no metal Pb was observed in the MPTS film, which indicates that the formation of metal Pb was completely suppressed. In the XRD curve, all perovskite films show the same main characteristic peaks at 2θ values ​​of 14.2º, 28.4º and 43.0º, indicating that the crystal structure of perovskite is difficult to change by additives. The diffraction peak at 12.9º is attributed to PbI2, indicating that all films have unreacted PbI2. In addition, the intensity of the (110) peak of MPTS was relatively enhanced, showing the improved crystallinity of MPTS. 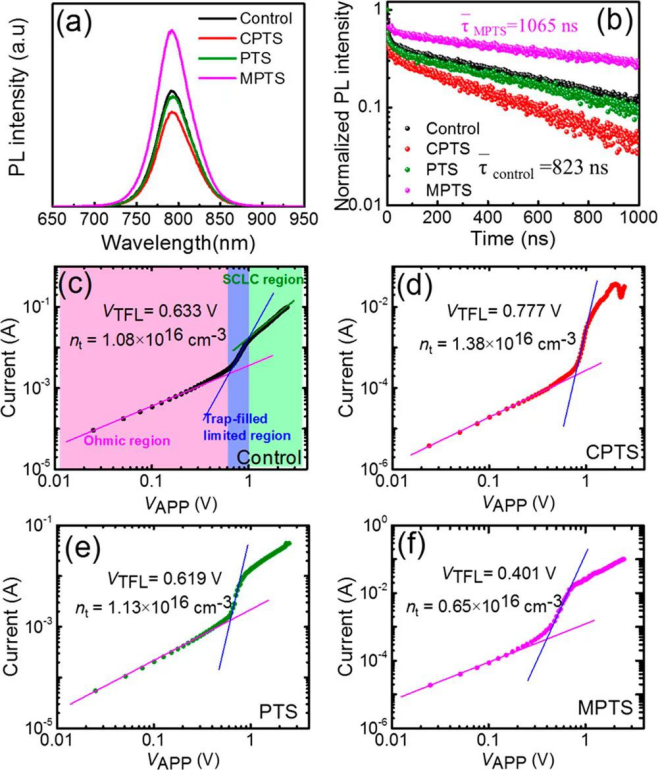 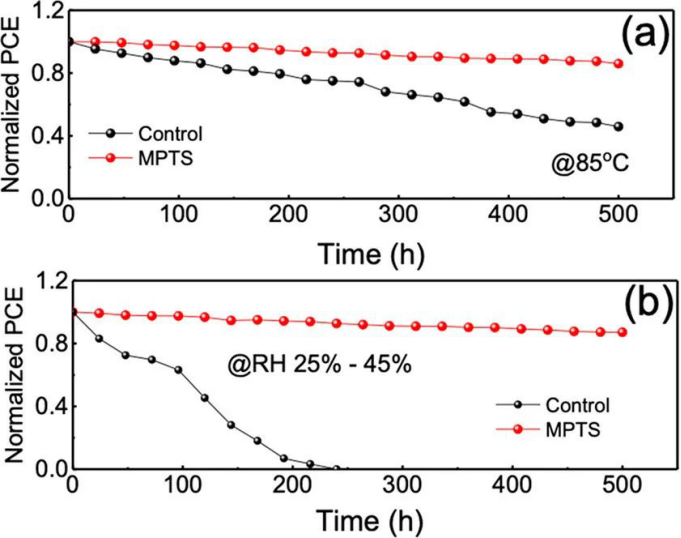 At 85ºC and about 2%RH in the dark, the MPTS device exhibits excellent thermal stability, and after aging in the dark at 85ºC for 500 hours, its initial PCE remains 85.9%, while the performance of the control device decreases by 55% the above. The stability of the perovskite device was tested at room temperature and 25-45% RH in the dark. The MPTS device retained 87.2% of its initial PCE after 500 hours, while the control device degraded rapidly, and the device degraded rapidly after 240 hours. The efficiency drops to zero.

In this work, an effective and reproducible multifunctional additive engineering strategy was proposed, in which crosslinking agents with different functional groups were introduced into the PbI2 precursor solution. Among the additives studied, MPTS with the -SH functional group showed the best performance, and at the same time had the three functions of crystallization and stability improvement and defect passivation. As a result, the PCE of the device with MPTS is as high as 20.8%, which is much higher than 18.4% of the control device. This is mainly due to the improvement of crystallinity and carrier lifetime, which reduces non-radiative recombination loss. In addition, greatly improved thermal stability and moisture stability were observed after the addition of MPTS. The study also indirectly proved that iodine vacancies in the perovskite film are dominant. Since defects in perovskites may be caused by missing anions (such as I-) and/or cations (such as Pb2+), the defect passivation should be carefully designed. Anion defects will cause positive vacancies, and cations will cause negative vacancies. Because the electron donating group shows a positive effect, the surface defects are mainly related to the vacancy of the iodide. This work provides important insights for the realization of PSC additive engineering to achieve high efficiency and long-term stability.

The above is some knowledge about solar cells to be shared today, please leave a message online for discussion.