The restructuring of industrial profit factors may reshape the pattern again. China’s solar battery industry has gone through a period of fixed benchmark feed-in tariffs, a period of bidding, and a transitional period that is currently moving towards parity. The subsidy support policy has played a significant role in promoting installed demand and increasing the profitability of manufacturing companies in the early development of the industry. Chinese solar battery companies are in Driven by policy support, technological progress, and capacity expansion, the scale of the industry has expanded rapidly, and the cost advantages in each link have become more obvious, establishing a global competitiveness and leading position. After 2018, as the installed cost of solar batteries continues to decline, subsidy policies have also accelerated. The profitability factors of manufacturing companies have shifted from policy-led to technology-led. The market competition pattern has increased due to the increase in the proportion of monocrystalline and the rapid popularization of PERC As well as changes in the capacity expansion of leading companies, the market share is gradually concentrated in the monocrystalline field and advanced production capacity with cost and technical advantages. Longi, Zhonghuan, Tongwei and other companies that grasp the development trend of monocrystalline and have technology and cost advantages In this process, it has achieved considerable development, and its market share has increased significantly, and it has grown into a new leader in the industry. 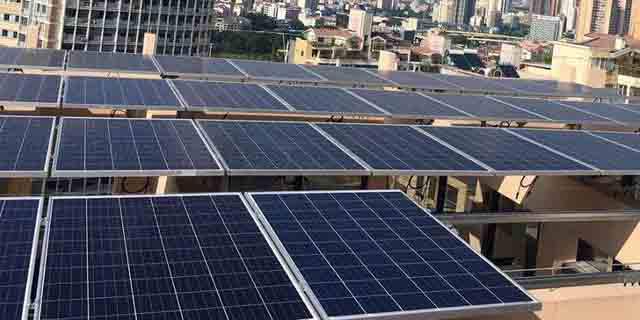 The global competitiveness of China’s solar batteries has been consolidated. In 2018 and 2019, through the expansion of new capacity, Chinese solar battery companies promoted the application of high-efficiency products and reduced the comprehensive power consumption of silicon production and other energy and raw material consumption, increased the input of silicon wafer production, and further promoted the thinning and large-scale silicon wafer production. The size and popularization of PERC high-efficiency battery technology and module technology have achieved a large-scale cost reduction and efficiency increase in the photovoltaic industry and a significant increase in global market share. In 2019, my country’s production of silicon materials, wafers, cells and modules reached 343,000 tons, 135GW, 110GW, and 100GW, respectively, accounting for 66.9%, 97.8%, 82.7%, and 76.9% of the world, respectively, an increase of 12.1\14.9 from the end of 2017. \17.5\4.9 pct; China’s solar storage battery industry has completed the transformation from large to strong with this round of technological innovation, and related monocrystalline product chain companies have established a global leading position in one fell swoop.