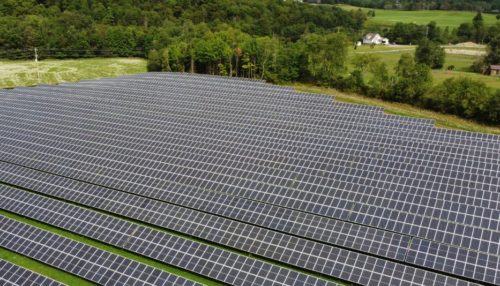 The new 2.2-MW solar array is sited on property owned by Morrisville resident Jeanette Davis. Previously used for corn silage, the land now hosts a renewable energy project under a 25-year lease agreement that will provide income for Davis and allow her to maintain ownership of her family’s land.

The clean electricity generated from Lawrence Brook Solar is purchased by VPPSA on behalf of Morrisville Water & Light. Like all Vermont utilities, Morrisville Water & Light is increasingly providing its customers with renewable electricity according to requirements set by the state’s renewable energy standard. A portion of the renewable portfolio must come from small generators located within Vermont. Lawrence Brook Solar is expected to produce 3,500 MWh of electricity in its first year, exceeding the in-state renewable generation requirements by 130%.

“Our mission is to keep electric rates affordable for our community,” said Morrisville Water & Light General Manager Penny Jones. “Our customers can take pride knowing their electricity is coming from increasingly renewable resources with prices remaining low and stable.”

Under the partnership, Encore performs all design, development, financing, and construction of solar projects. VPPSA manages the resulting electric generation and maximizes its value for its member utilities’ communities.

“It is central to our mission to develop solar projects that benefit the local community,” said Chad Farrell, CEO and Founder of Encore Renewable Energy. “Lawrence Brook Solar goes beyond providing affordable electricity to ratepayers with the additional benefit of being a reliable source of income allowing Jeanette Davis to keep her family’s land.”

The commissioning of Lawrence Brook Solar represents another milestone in our partnership with Encore Renewable Energy,” said VPPSA General Manager Ken Nolan. “VPPSA’s mission is to help Vermont communities meet their goals, and we are grateful to have Encore helping us develop utility-scale solar that allows our communities to reap the benefits of renewable, reliable, and affordable energy.”